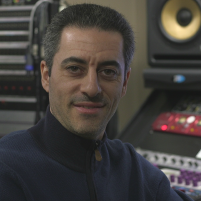 Originally from Russia, Greg Kolchinsky was involved in music from an early age. Greg studied voice and piano but didn’t catch the pop musical bug until he was 14 and heard the Beatles and began listening to Western music. It was hard to get your hands on good western music in the mid 80’s in Russia. Greg also played in a Russian band who made a number of amateur recordings. Before emigrating to Canada in his early 20’s Greg studied sound for film.

Over the last 3 years, Greg has continued to expand his considerable experience and reputation as a sought after recording and mix engineer. In the fall of 2010 Greg was hired as an engineer at Find A Way Studios and recently became a recording instructor for Find A Way Music School. He is also an instructor at Trebas Institute in Toronto. Greg’s versatility allows him to take on all types of music projects including music for TV, radio and live recordings. Greg’s most recent clients include The Canadian Tenors, The Jersey Boys cast, Jesse Cook, Amy Sky, Mark Jordan, Anne Murray, Levon Ichkhanian, Robi Botos, Lenz Ent., Somerset Ent., Mark Masri, Colin Hunter, U of T Gospel Choir, David Clayton Thomas and many more.