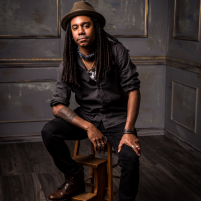 Julian Taylor is a charismatic frontman, prolific songwriter, vocalist and multi-instrumentalist who masterfully re-combines and updates the many vintage sounds that inspire him, to create bold, innovative songs. A unique Canadian artist, Julian’s outgoing and engaging personality immediately makes you feel at ease. His charming demeanour and deep-rooted musicality allow him to connect with audiences at both a musical and soul level in a profound way. A calm person offstage, Taylor morphs into an intense, almost shamanistic presence onstage. Toronto poet Robert Priest calls him “the kind of artist forever in the zone, the voice limitless, the songs full of feeling and memorable hooks.”

After achieving nationwide success in Canada leading his former band Staggered Crossing, Taylor assembled the Julian Taylor Band, an eight-man funk, soul and roll revue. Reflecting their hometown’s rich musical tapestry, these accomplished Toronto-based musicians are fluent in virtually every genre and embody the same sort of passion and tenacity as Taylor himself.

JTB’s debut album Tech Noir (2014) reached #1 on campus radio Top 30 charts in Canada and garnered feature coverage in the Toronto Star. The ambitious double-album follow-up, Desert Star (2016), included “Set Me Free,” which spent eight weeks on the CBC Radio 2 Top 20, peaking at #2. The late Frank Gutch Jr. said, in No Depression, “I would pick Desert Star as Album of the Year based upon versatility alone.” Taylor has also placed his songs in such globally broadcast TV shows as Kim’s Convenience and Elementary, and JTB has impressed audiences at such venues as the Festival d’été de Québec and the Toronto Urban Roots Festival (TURF).

To sign up for lessons with Julian please fill out the form below: