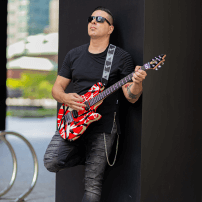 Danny J. Ricardo, a.k.a. ‘Danny J’, is a Toronto native who started his Rock n’ Roll journey at the age of 13. Danny attended Bishop Marrocco/Thomas Merton C.S.S and graduated top of his class with an “Excellent Achievement Award” in music. He continued his post-secondary education at Humber College where he studied Jazz. After a short year, Danny decided to study Audio Engineering at Trebas Institute for the Recording Arts and received a Diploma in Audio Engineering.

Upon graduating, Danny quickly made a reputation for himself, not only as a guitarist but a composer as well. In 2004, Danny collaborated with actress/singer Cassie Steele, known for her role as “Abby” on CTV’s The L.A. Complex and as “Manny” on the hit show Degrassi The Next Generation. The debut album “How Much for Happy” had a cross Canada tour in support of singer Keshia Chante. In 2006 it was featured during Canadian Music week and received a gold certification in Canada.

In 2009 ‘JUSTUS’, one of Danny’s long-time music projects came to fruition. In February of 2010, JUSTUS won 1st prize in a band contest called “4 The Rekord”. In April of that year, they also qualified for TIMA, the Toronto Independent Music Awards for “Best Live Act”. 2011 they hit the studio with producer/engineer Joel Kazmi (Sum 41) and released their debut EP “Don’t Surrender” in May of 2012. “Back In” the band’s single, was received extremely well and was featured on CBC radio. Q107’S Dominik Diamond says “JUSTUS…good band, good tunes and great musicians”.

In March of 2011, GOWAN went back on the road to support the re-released hit album “Return of The Strange Animal”. In 2012 Gowan celebrated another milestone with the 25th anniversary of yet another hit album “Great Dirty World”. Moon Light Desires live show, hit the road in March of that year and ended in July with 3 sold-out shows at Fallsview Casino in Niagara Falls. Gowan returned in 2013 and continued touring in many parts of Quebec and Ontario, to sold-out audiences. In 2014 Gowan was asked to take part in a docuseries called “Sessions X”. It was produced by Gavin Brown (Three Days Grace) and in 2016 was nominated for a CSC award (Canadian Society of Cinematography). Gowan wrapped up 2014 with 2 sold-out performances at the Living Arts Centre in Mississauga.

Offstage Danny has established himself as a proficient Guitar Instructor and mentor. From teaching in high schools, rock camps or one on one master classes. He’s inspired and guided his students into achieving their own goals. Some of Danny’s notable students are; Phil Radu Berklee College of Music graduate and his band Beyond The Sun. Warner Music recording artist & Juno nominated, Courage My Love; Mercedes Arn-Horn. Diego Gomes YTV’s The Next Star winner 2010 and Atlantic recording artist Francesco Yates. 2018 Francesco went on tour with Justin Timberlake and his hit song “Sugar” with Robin Schulz is still trending. In 2019 Danny began working and developing his latest protege Sofia Camara. In this project, Danny produced and co-wrote 3 singles. The singles were received well enough to get Sofia signed to 21 Entertainment. These are just some of the many students Danny has helped and developed over the years.

Along with collaborating on different projects, Danny continues to work on his own solo instrumental music and content creation.

To sign up for lessons with Danny please fill out the form below: 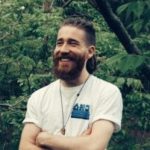 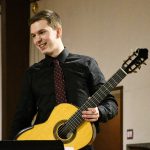